Bam's Unholy Union is an American reality series that aired on MTV and MTV Canada. It follows Bam Margera and his fiancee Missy Rothstein as they plan their wedding. In addition to Margera and Rothstein, the show features several members of the CKY Crew. 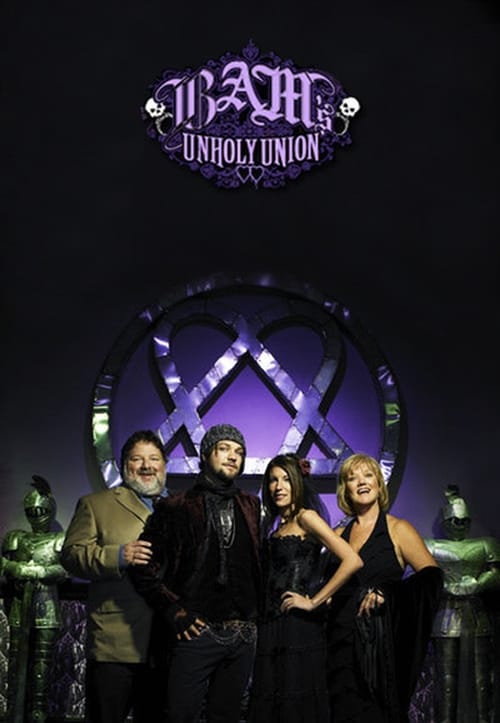 Ev and Ocho is an American reality documentary television series that was scheduled to premiere on September 3, 2012, on VH1. The series chronicles Chad Ochocinco Johnson's engagement and eventual wedding to Evelyn Lozada, who appears as a cast member of Basketball Wives. Eleven episodes were produced, including a two-part wedding finale.

Quintessential reality star couples are forced to face their personal demons in an extreme relationship boot camp, hoping to fix their broken unions. Raw, unbridled truth ensues when they are pushed to their emotional and physical limits to see if their relationships are worth saving or they should pull the plug.

A group of family and friends travels to a secluded island for a destination wedding. They've come to laugh... to love... and, though they don't know it... to die. As the wedding festivities begin, friendships are tested and secrets exposed as a murderer claims victims, one by one, transforming the wedding week of fun and celebration into a terrifying struggle for survival.

Follows a very special day in a young couple's life, their wedding day... but tells the stories you don't see on the wedding video.

Celebrate the craziest, most over-the-top brides wreaking wedding day hell with epic meltdowns, family feuds & social media wars! As they take the plunge to the altar, they vow no one will get in the way of their “perfect” day!

Rae Ann Carter always wanted the fairytale where she meets a prince, falls in love and gets married, but feared that dream would never come true. Suddenly, Rae goes from having no man in her life to having three –charming Luke, passionate Adam, and sophisticated Harry – all in love with Rae and asking to marry her. Which man will she choose?

The series revolves around two people who hate each other but their families want them to marry. They make some plans to cancel their wedding but slowly get in love.

The story about two individuals from different backgrounds who became victims of their circumstances and are destined to spend their whole lives with each other. Gaeti is a beautiful girl who has a cheerful nature and is loved by everyone around her. She belongs to a wealthy family. While, Badar is an ordinary, middle-class guy, who helps Gaeti’s father at work. He is secretly in love with Gaeti.

The story of two wedding planners in Delhi, where tradition jostles with modern aspirations against the backdrop of big fat Indian weddings revealing many secrets and lies.

Some men and women, desperate to find a partner to share a life-long relationship, enter an extreme social experiment: A group formed by a psychologist, a sexologist and a psychiatrist has previously studied their personalities until finding the most compatible candidate. The catch? These pairs only will meet for the first time at their wedding day.

Don't Tell The Bride is a British reality TV series shown on BBC Three in the United Kingdom, BBC America in the United States and The LifeStyle Channel in Australia amongst others. As of 2012, six series of the show have aired, and the seventh will be filmed in 2013. In February 2012, it was announced that the show had been nominated for a Rose d'Or award for best 'Factual Entertainment' show.

Las Vegas Garden of Love is a reality television series that aired on ABC Family for 10 episodes during the summer of 2005. Like most ABC Family reality series, it was not given a real ending or a second season, due to very low ratings. It was re-run until Fall of 2005.

Follow Wedding Planner Lynzie Kent as she and her team create one-of-a-kind wedding celebrations that capture the true spirit, personality and unique love story of every couple they work with.

Style expert George Kotsipoulous works to transform couples who have let themselves go. From wardrobe and hair to tattoo removals, the couple will meet each other at the altar with a new look, and most importantly, renewed confidence as they head off into wedded bliss.

Where to I Do?

For every couple getting married, big decisions have to be made. And the biggest decision of all is location, location, location! Property and design expert Tommy Smythe takes engaged couples on a tour of three completely unique spaces, where their fantasy wedding could take place.

I Found The Gown

I Found The Gown is a reality series on TLC set at VOWS Bridal Outlet, a discount bridal store in Watertown, Massachusetts. The show chronicles owners Rick and Leslie DeAngelo hunting for discounted dresses in factory attics, boutique back rooms, and department store warehouses across the world while brides search VOWS for the perfect wedding dress at a significantly reduced price. The designer gowns featured on the show, including Vera Wang and Monique Lhuillier, are typically sold at 50 to 80 percent off the retail price. The show premiered on August 24, 2012, and was renewed for a second season, which began on April 19, 2013. It airs new episodes on Fridays at 10/9c and 10:30/9:30c.

A behind-the-scenes look at some of the most spectacular weddings and engagements at Disney Destinations around the globe.

An indefatigable and boastful woman, Mandy Mak, wants to be a wedding etiquette guide after she gets the axe, simply for its simple job nature and attractive income. Chong Sze-tim, an expert in the trade, declines to take her as a student as she sees through Mandy’s motive. Mandy will not yield though. She tries her best to please Sze-tim’s younger brother, Chong Sze-chai, and his wife, Phoebe Szeto, who employ her as a coordinator in their bridal wear company. When Mandy meets a wedding photographer through the company, her view on life changes.